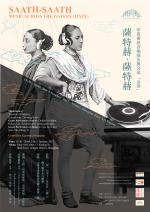 This unusual concert features three singers from India, a pipa player from China, and three kunqu performers. The singers will demonstrate the main genres of Hindustani classical music and perform compositions in different ragas or melodic forms. The pipa player will engage in a musical jugalbandi or dialogue with the singers, invoking strains of Indian music through the Chinese instrument. The Indian singers and kunqu artistes will perform kunqu music in Indian melodic style and Indian songs in kunqu style.
Please send your personal info to [email protected] for reservation, an confirmation email will be sent back to you if the reservation is completed.
For transportation and accommodation enquiries, please contact:
Miss Xie
+86 15802183274
+86 13122537299

Saath-Saath means to do things together.

In November 2016, a video installation, authored by film-maker Surabhi Sharma and cultural theorist Tejaswini Niranjana, and titled "Riyaaz' (practice), was exhibited at the 11th Shanghai Biennale. As a collateral event of the Biennale, a series of workshops and performances called 'The Space of Riyaaz' took place, involving Indian and Chinese music.

Building on the collaborative energies of the November 2016 project, the Saath-Saath Project, extending over three years, will aim to achieve new collaborative outcomes with the participation of Indian and Chinese musicians. The Hindi word Saath means ‘together’.

The overall objective is to generate a strong interest in thinking through questions of cultural practice in Mainland China and Hong Kong with the inputs of scholars and musicians from India. A long-term goal would be to enlarge the scope of critical social science-humanities scholarship through connecting to the ways in which cultural practices like music-making help us interrogate the contemporary moment. What is our relationship to the past as we envisage it in Asia? What does it mean to acquire the skills to perform Indian classical music or play the pipa or act in Kunqu opera today? What do modes of performance and musical teaching styles in India and China tell us about how we relate to our everyday worlds? The first step in exploring some of these questions would be to develop collaborative conversations between musicians. The Saath-Saath Project enlists Indian and Chinese performers to open up avenues of musical conversation.

Jinze Arts Centre
Jinze Arts Centre is located in the town of Jinze of the Qingpu district of Shanghai, which was known throughout the ages as “The Land of Fish and Rice”. Jinze was highly valued and became famous because of its moist lands, a line of reasoning that has been immortalized in the famous saying, “farmers view moist lands as gold”. The lakes and ponds are scattered widely about, and the rivers intersect one another. Jinze once had forty-two bridges, which had earned the town a reputation as “matchless under the heavens for ancient bridges”. The bridges of Jinze have always connected to temples, giving rise to the saying: “The bridges have temples and the temples have bridges.” Having weathered the dramatic changes of history, the resonance of refined poets, scholars, countless foreigners and locals can still be seen and felt under the blue lantern light.
As a water village that retained an ancient style, Jinze Arts Centre now has the purpose of passing down traditional Chinese arts and crafts while also maintaining the connection between the young generation and their history.
Jinze Arts Centre occupies approximately 11.5 acres of space, resting on the foundation of a few old, abandoned factories. It has undergone more than ten years of remodeling and reconstruction, and already has several ancient-style buildings and structures. Former residences were arranged into a display style, while meeting centers, and tens of thousands of square meters of tool display rooms for weaving, colored glass, lacquer ware, red ware pottery, ancient dye methods, porcelains, pastries, were built to supply resources to designers, Jinze Arts Centre members, workshops to encourage “continued and diligent practice after learning”, Tibetan Buddhism sand mandala professors, and exhibitions, as well as accommodate the learning, touring, boarding, lodging, and use of facilities for hundreds of people.
Jinze Arts Centre believes in the concept of “the use of tools and the way as one”, with the purpose of gathering traditional craftsmen, who forge a practical and operational foundation for the use of tools and utensils in handicraft and traditional Chinese architecture and design while also inheriting and passing down culture to allow the spirit of ethnic identity to survive and flourish.
Even though Jinze Arts Centre is an exhibition center for tools of a practical nature, every fence, corridor, building, stand, restaurant, lodge, and workshop is part of the traditional arts and craft products exhibition center. The Arts Centre also has business management, including the rent of exhibition spaces, small-scale high-level conferences, and use of the recording studios.
The community’s vast array of peanut trees, singing and gliding of birds, and the sounds of instruments and resonance of tea culture make Jinze Art Centre one of the best suited for leisure and the cultivation of scholarly activities.