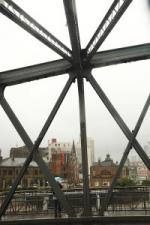 The cities of Mumbai and Shanghai are currently undergoing dramatic transformations. The Shanghai model has been propagated by the Indian government as the new model of development. This has resulted in many initiatives by the government in infrastructure development, new town and housing policies, which claim to be inspired by the ‘Shanghai Model’. This has further resulted in a landscape of fast transforming inner city areas, where older historic districts are erased and replaced with developer housing; land in peripheral villages is acquired to create enormous Special Economic Zones and large tracts of slums in the path of this infrastructure building are displaced to the edge of the city.

These processes seem to be mirroring each other in both contexts. The goals of both seem to emerge from a need to change large tracts of land in a very short time. The processes however in which these transformations occur in both contexts are different. While in Shanghai, land acquisitions have been more direct, as all land belongs to the government, in Mumbai lands have been assembled for private exploitation through various policy amendments to the existing Development control regulations.  In Mumbai, while the earlier policies were, at least on paper geared towards a more equitable distribution of land, the new policies are facilitating a blatant accumulation of capital via land in the hands of private developments. Shanghai is also using land as a commodity to hand over to global capital for the accumulation of more capital. Both in Mumbai and Shanghai, the ones affected by the processes of transformation are poorer residents and rural inhabitants.

This transformation disrupts livelihoods and erases all cultural processes embedded in older built environments. For example in the case of Mumbai we have seen the transformation of the older industrial district of cotton textile mills and its working class mill housing culture fast transform into an upper class residential and commercial precinct. The older typologies of chawl housing, cotton textile mill sheds and chimney-stacks are obliterated to make way for new high-rise typologies. Similarly in the inner city of Mumbai, residential typologies that have evolved over time, and have been the genesis of a culture of community life, are now being clubbed under a new policy of land assembly called “cluster development’, to facilitate the fast transformation of these lands.

Having said this, we find that meta-narratives such as above, lead to a situation which leaves little space for intervention. On the other hand if we are able to engage with these processes through a fine-grained research lens, there may be several new capillaries that may open out for practice.

Study of Rehabilitations – Ways of Seeing: Developing a Methodology

The Same Same project will focus on studying the processes and sites of rehabilitation in both Shanghai and Mumbai through a methodology of micro-narratives of spaces and actors involved. The 10-day Shanghai study will focus on two sites of rehabilitation – one which is in the process of transformation and another which has already been transformed. Students from KRVIA and Tongji University will undertake an in-depth study of these processes.

Methods of representation would be developed to engage with the process of a fine-grained research. The research project will explore drawing as a method of seeing.

A parallel study can be planned in the inner city of Mumbai next year.

On our West Heavens’ trip to Mumbai in March 2011, more than one taxi drivers, upon hearing that one of us is from Shanghai, replied, “Mumbai, Shanghai, Same thing!” With a strong Maharashtra accent, it sounds like “Same same!” Thus, on our way to the airport, we decided to call this urbanist project SAME-SAME!

The Kamla Raheja Vidyanidhi Institute for Architecture and Environmental Studies was established in 1992 by Upanagar Shikshan Mandal with a grant from Kamla Raheja Foundation. A group of educationist, professionals and artists became involved in envisioning a new direction for this school. The KRVIA since its inception has been deeply involved in issues concerning the city. Its location within this bustling metropolis has given it the advantage of becoming a laboratory of sorts that engages and interacts with the city as it changes. Through its varied research and consultancy projects, and within the undergraduate curricular and extra-curricular programs, the KRVIA has engaged actively with the city and provided an important platform for debate and discussion. It has become an important centre for the production of knowledge on urbanity, especially in the Indian context.

The Design Cell is the research and consultancy division of the Kamla Raheja Vidyanidhi Institute of Architecture and Environmental Studies and was started with an intention to research on Mumbai in 1995. It interacts with the various agencies concerned with development and explores methods of understanding and intervention in the Metropolis. It has carried out various mapping experiments in the city and has used these findings in actual projects like the redevelopment of industrial lands and public participation in the conservation of early suburban development.

The Design Cell has been actively involved in efforts to map the urban environment in order to understand it better, articulate its problems and find alternatives for interventions. The Cell works with a team of architects and other consultants for history, economy, social geography, infrastructure and planning.

The Design Cell has undertaken several projects in the city of Mumbai and has successfully involved with them. It has become an important actor in the development processes of the city where it has been able to theoretically and actually articulate a new practice and is been seen as a trustee because of its academic affiliations.