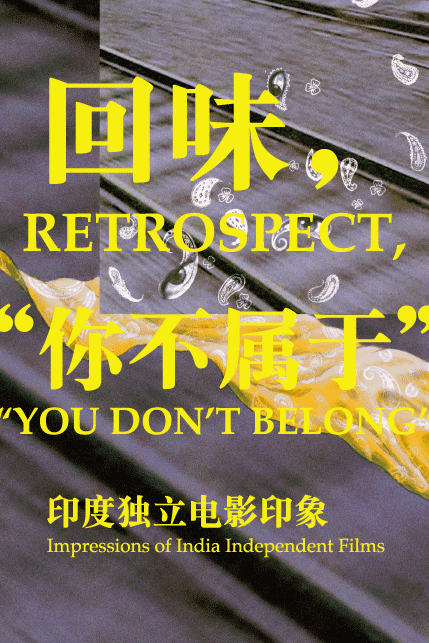 In Nov 2011, West Heavens invited the renowned Indian film theorist, Ashish Rajadhyaksha as the curator and presented “You Don’t Belong: Pasts and Futures of Indian Cinema” film festival, which screened over 30 India independent films including drama, documentary and experimental images and toured from Beijing, Shanghai, Guangzhou to Kunming. The Festival was aimed to present Indian film practices other than Bollywood movies, to China’s audience.

“India-China Dialogue on Cinema and Social Thought” was held along with the screening and the curator AshishRajadhyaksha also edited and published the Indian film research reader “You Don’t Belong: Pasts and Futures of Indian Cinema” in Chinese to illustrate how the Indian social science theorists try to explain India’s cinema phenomenon.

One year later, Oct 22nd 2012, with the great success in Main Land China, “You Don’t Belong” arrived in Hong Kong. With the title “You Don’t Belong: Moving Images from India”, it was organized in a different way to present the context of India independent films, in both public spaces and universities, and raised discussion about the relation between films and societies in Hong Kong’s culture and film circle.

To respond to that, CNEX and West Heavens present “Retrospect ‘You Don’t Belong’” online screening with 4 films from the origin, Tales of the Night Fairies, Jashn-e-Azadi: How We Celebrate Freedom, I’m The Very Beautiful! and Partners In Crime, along with three lecture videos (Featuring Ashish Rajadhyaksha, Sanjay Kak, Wu Jueren and etc.) from India-China Dialogue on Cinema and Social Thought. We hope, with this effort, independent images from different regions can spread and raise debates, so that there would be more intellectuals involved in the film and film theory thought exchange. It is also regarded as a review of “You Don’t Belong” two years’ practices and a preview of the future screening event in Taiwan.

Presented by West Heavens and CNEX

TALES OF THE NIGHT FAIRIES

AshishRajadhyaksha: Filmmaker/film theorist ShohiniGhosh’s film on the sex workers of Sonagachi, Kolkata’s famous red-light district. Thousands of sex workers constitute the DMSC (Durbar MahilaSamanyay Committee or the Durbar Women’s Collaborative Committee), an initiative that emerged from the Shonagachi HIV/AIDS Intervention Project. A collective of men, women and transgendered sex workers, DMSC demands decriminalization of adult sex and the right to form a trade union. Five of these get together with the filmmaker to reproduce a collective journey of filmed storytelling. The city of Calcutta forms the backdrop for this story.

AshishRajadhyaksha: Kak’s stunning testimony to the concept of independent India begins on Independence day, and the flag of an independent country goes up in the heart of Srinagar, Kashmir. Kak’s film is really about just another day in Kashmir, an average day in extraordinary times. Kashmir has suffered an armed struggle for nearly two decades now, with 60,000 dead and nearly 7,000 missing. Kak uses verité footage, poetry and text to make his film.

Kak’s film throws open the larger question, central also to Sonia Jabbar’s Autumn’s Final Country, about the role of documentary cinema in conditions of extreme instability. Is there an act of atonement, of mourning even, in the mere act of documentation? The incessant tendency of people to find history somehow, somewhere, in graveyards as much as in faded prints of people who are now dead or missing, has made Kashmir the frontier of an entire tradition of documentary filmmaking of which this is the very finest example.

AshishRajadhyaksha: The woman is an ‘international’ bar singer by profession who knows her way around the male world. The man, the filmmaker. The woman invites the filmmaker into her home, to film her and her life in intimate conditions. They presumably have a relationship, but she is a very well traveled person, thirty years old, who goes to many countries and sings in many night clubs. So what then does she give of herself?

Ranu’s predicament as, presumably, a poor, exploited bar singer ‘inspires’ the filmmaker to make a film. But is she indeed exploited? She was a refugee once, in Kolkata, suffered life an early pregnancy, attempted suicide, has a string of broken relationships. The filmmaker wants her, obsessively, on camera: he also wants to pity her. ‘He objectifies her, checks her out voyeuristically, gazes at her burnt body compassionately, disbelieves her, attempts to understand her, never letting his audience think he is in a better position than they are. He is determined not to be her saviour in any way and labours to point out that he is as much an exploitative man as any other in Ranu’s life. His relationship with her is less organic and more what he had decided it should be perhaps. But it is important in the scheme of this film, which means well and is conscious of that. It is self assured. As a result it does not attempt to justify, emancipate or patronize Ranu or her like. It does not worry about political correctness either. It is not afraid to barge into Ranu’s world as it is’, in the words of an outstanding review of the film in Mumbai Mirror (September 8, 2008).

I’m the Very Beautiful! comes together with AvijitMukul Kishore’s film Snapshots from a Family Album to explore the tender and compassionate side of what has been titled the Privacy of the Home.

AshishRajadhyaksha: A documentary on the creative underside of the digital revolution, and the struggle of both law-enforcement mechanisms as well as the managers of the new creative economy to keep up. The economy of piracy, of the fast flow of moving images on the very edge of the defined market, goes alongside new practices of music and film making and new practices of archiving. Remixes, crossovers, cover versions, now stand frontally in opposition to the law. Who owns a song?,Vohra asks, the person who made it or the person who paid for it? Can, logically, half of humanity, be criminal, and is breaking the law a part of everyday life? The film explores, with amazing verve, the practices of illegitimate digital cultures in which technology is changing the contours of the market. ‘Metal heads who market their own music, folklorists who turn tribal aphorisms into short stories, music archivists who hoard and share everything they can get their hands on, anti-piracy fanatics who think piracy funds terrorism, a smooth talking DVD street salesman who outlines the efficiency of the illegal market, media moguls, lobbyists, “monetizers, downloaders, uploaders, the biggest hit song of 2010 and the small time nautanki singer whose song it was inspired by – these places and people throng the world’s bazaar in which the film is set’ (catalogue of Magic Lantern Foundation, New Delhi, http://www.ucfilms. in/subject/culture/partners-in-crime/).

1. The Documentary as Testimony

2. Documentary Images and the Language of Rights

3. From the Copyrights of Culture Products, their dissemination to the Ecology of Independent Filmmaking

You Don’t Belong: Pasts and Futures of Indian Cinema