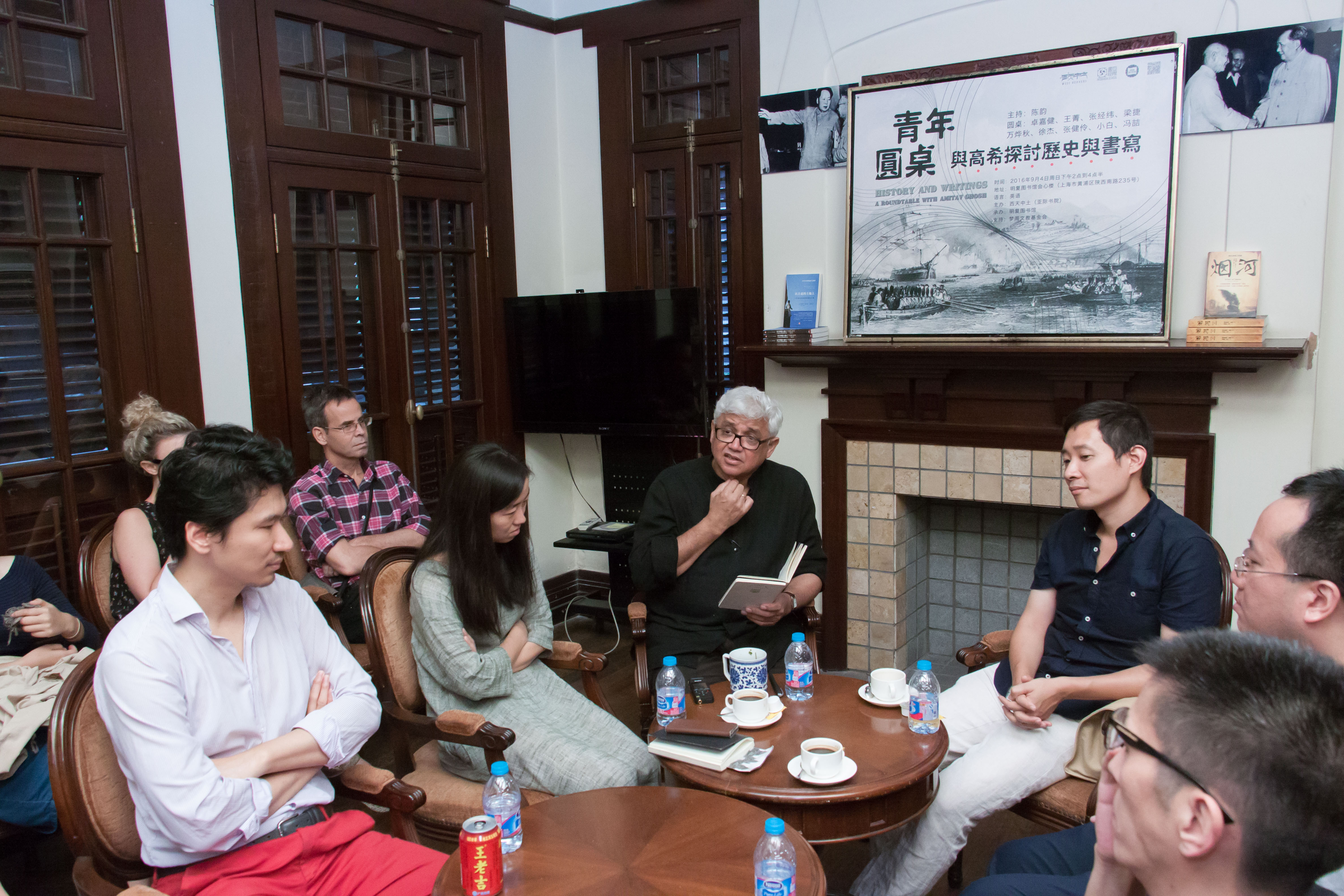 History and Writings
A Roundtable with Amitav Ghosh

Towards the end of Amitav Ghosh’s visit to China this summer, West Heavens invites nine young practitioners to join a roundtable discussion with the writer on issue of History and Writings. Each of them will bring a particular interest, project, or methodology that they are working on, and raise questions and share experiences from a practitioner’s perspective. This intensive while heated discussion may open up different levels of thinkings, writings and problematics that could become part of our imagination and history through future works.

ABOUT
Amitav Ghosh was born in Calcutta and grew up in India, Bangladesh and Sri Lanka. He studied in Delhi, Oxford and Alexandria and is the author of The Circle of Reason, The Shadow Lines, In An Antique Land, Dancing in Cambodia, The Calcutta Chromosome, The Glass Palace, The Hungry Tide, and the first two volumes of The Ibis Trilogy; Sea of Poppies, and River of Smoke.
The Circle of Reason was awarded France’s Prix Médicis in 1990, and The Shadow Lines won two prestigious Indian prizes the same year, the Sahitya Akademi Award and the Ananda Puraskar. The Calcutta Chromosome won the Arthur C. Clarke award for 1997 and The Glass Palace won the International e-Book Award at the Frankfurt book fair in 2001. In January 2005 The Hungry Tide was awarded the Crossword Book Prize, a major Indian award. His novel, Sea of Poppies (2008) was shortlisted for the Man Booker Prize, 2008 and was awarded the Crossword Book Prize and the India Plaza Golden Quill Award.
Amitav Ghosh’s work has been translated into more than twenty languages and he has served on the Jury of the Locarno Film Festival (Switzerland) and the Venice Film Festival (2001). Amitav Ghosh’s essays have been published in The New Yorker, The New Republic and The New York Times. His essays have been published by Penguin India (The Imam and the Indian) and Houghton Mifflin USA (Incendiary Circumstances). He has taught in many universities in India and the USA, including Delhi University, Columbia, Queens College and Harvard. In January 2007 he was awarded the Padma Shri, one of India’s highest honours, by the President of India. In 2010, Amitav Ghosh was awarded honorary doctorates by Queens College, New York, and the Sorbonne, Paris. Along with Margaret Atwood, he was also a joint winner of a Dan David Award for 2010. In 2011 he was awarded the International Grand Prix of the Blue Metropolis Festival in Montreal.

Ka-Kin CHEUK is a Post-Doctoral Researcher at the Leiden University Institute for Area Studies (LIAS), where he is part of an interdisciplinary research project, ‘Immigration and the Transformation of Chinese Society’ (2015–2018). Born and raised in Hong Kong, he was educated at the Chinese University of Hong Kong (BSSc and MPhil in Anthropology) and St. Antony’s College, University of Oxford (DPhil in Social and Cultural Anthropology). Ka-Kin’s on-going research focus on two disparate yet interrelated topics: Sikhs in Hong Kong and Indian traders in South China. His most recent publication “Everyday Diplomacy among Indian Traders in a Local Chinese Market” appears in Cambridge Anthropology.

WANG Jing graduated from English Literature, Renmin University in Beijing and Doctoral candidate in Social/cultural Anthropology at Rice University , Houston, USA. Her broad research interests are historical imagination, anthropology of state, urban development, social movement, documentary production, and modern Chinese art. Her last works are "Returning to the Silk Road?: Ethnicity as an Alternative Modality of Cultural Management in a ‘Small’ City',” a research project on the historical anthropology of Xi’an and "Social Media as Intervention: An Investigation of Protest against the PX Project in China" on the perceptions of risk in China today. Currently, she is doing her fieldwork in Xi’an. Her project focuses on the Chinese state’s ongoing promotion of domestic multiculturalist policies through exploring the way it mobilizes cosmopolitan imaginaries of the “One Road One Belt.”

ZHANG Jingwei (b.1982), anthropologists, columnist, translator, and stuff of Shanghai Museum .
Research fields: anthropology, ethno history, art history, mostly interested in new trends of the Chinese social transformation, under the background of Globalization.
Translated works: “Stone Age Economics”, “Ilongots Headhunting” and many other works. Works scattered on Nanfang Daily, Southern Weekly, Oriental Morning Post, The Paper, and other print and online media.
“I am currently working on the migration of population and material in the East Asian. As the conclusion of this study has been basically obtained, I begin to move into new areas as the old topic of exploring capital, exploitation, and equality. And I will also check out whether the various propositions related could still be workable today.”

LIANG Jie, PhD in economics, works in the Shanghai University of Finance and Economics now. He has broad interests covering History of Economic Thought, Development Economics, Political Philosophy and India Study. He has visited a couple of Southeast Asia countries and had some field works especially in India. His recent research interest is the history of India economy after 1947.

Charles WAN studied engineering and literature at Cornell (not quite in imitation of Thomas Pynchon). To gain knowledge of the real world, he has worked as an agricultural commodities trader in various parts of the world, observing with interest different social, commercial and financial transactions. Lately his independent intellectual efforts have focused on economic history – specifically the political economies of different nations and how fault lines underlying them propel history forward. Charles’ favorite poets are Hölderlin and Celan.

XU Jie (b.1982) works and lives in Shanghai. He graduated from Art History Department, Fine Arts College of Shanghai University (MA) in 2008, and won John Moores Art Criticism Prize (First prize) in 2012. His Solo show includes Weltanschauung, AM Art Space, Shanghai in 2013. He curated Reality Matters program at Ray Art Center & OCAT Art Museum & AM Art Space, Shanghai.
While curating this series of Chinese Documentary Film screening programs called “Reality Matters”, he pushed forward the question of “what is reality” further and got deeper into the thinking of “what is the material of history”. What is our entry point to a meaningful understanding of Chinese modern history? If documentary films could be seen as secret histories of a nation, Xu will go on working on concrete issues from the reality through documentaries and non-fictional historic writings, with a purpose to develop the increasingly marginalized documentary films in his way.

Xiao Bai, professional author of Shanghai Writer’s Association, took up writing in its strict sense in 2005. He has published two novels, Game Point and French Concession, one novella, The Agent Mr.Xu and two anthologies of essays, Erotic Hamlet and Acting vs Peeping. French Concession has sold copyrights to US. , UK, France, Germany, Holland, Italy, etc. The highly acclaimed Italian version of French Concession was published in 2013, and the English version come out in July，2015. Erotic Hamlet captured comic touch in ancient and contemporary erotic texts as well as images, which was brought to a full play by forging an academic narrative in an ironic way. There were so many metaphors and paronomasia haunting between lines that you might even read it as a satirical poetry. It won 2009 Book of Year organized by New Weekly.
Acting vs Peeping was mainly an anthology of literay critics. While composing essays in this anthology, It seemed that the author himself had developed a clearer idea about the identy of an writer. All the essays shared an implication on self-recognition of writers and the relationship between texts and authors, authors and readers. Both of his two novels, Game Point and French Concession, might easily get geographical marks such as ‘urbanism’ or ‘Shanghai complex’ thanks to the vivid description of the tremendous city. The story of Game Point happened in the 90s of 20th century, while French Concession traced back as early as 30s of 20th century. Great changes took place during the two times. In Xiao Bai’s opnion, the outline of Shanghai today, more than its geographical sense, had been roughly sketched in those two times. In this way his fictional characters could be regarded as footnotes of a historical map of Shanghai, whose actions and encounters were confined by the streets and buildings, while the streets and buildings themselves were defined by what they did.