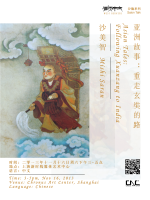 Indian writer Mishi Saran was living and working in Hong Kong, when in 2000, she decided to quit and set off on a journey to India, replicating the route taken 1400 years ago by the Chinese Buddhist monk Xuanzang. The journey, she felt, would connect her life in China – the world she had studied and worked in—and India, her mother country that felt far away from her soul. She found herself spatially crossing a seemingly permanent presentation of landscapes and repeatedly divided borders and peoples, while temporarily passing through layers of past and present. She spent a year tracing the footsteps of Xuanzang along the Silk Road from China to India, passing through Uzbekistan, Kyrgyzstan, Pakistan and Afghanistan. The courage and encounters of Xuanzang unfolded in front of her, along with the intercourses in cultures, economies and spirits that are still living on this route. At the same time, her journey recalls the other side of an East Asian story

Ms. Mishi Saran was born in India and spent the first ten years of her life in New Delhi. Since then, she has lived in Switzerland, Indonesia, the United States, China, Hong Kong and Korea. After majoring in Chinese studies at Wellesley College (USA), she worked as a journalist in Hong Kong for a decade. She moved to Shanghai in 2006. She is the author of the critically-acclaimed travel book-cum-memoir Chasing the Monk’s Shadow: A Journey in the Footsteps of Xuanzang (Penguin, 2005). Her second book, a novel, The Other Side of Light (HarperCollins India, 2012), was shortlisted for the 2013 Commonwealth Book Prize, a literary award open to writers from 54 countries. She is currently working on her third book, also a novel, set in Shanghai in the 1930s.