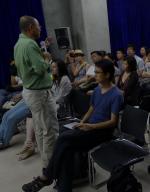 The presentation will attempt to define activism in the context of art making and viewing practices in India. Defined away from the notion of art as reactive reflection of socio-political realities, activist art would be considered as interventionist in approach, and political in terms of practice.   While all art ideologies may be said as aligning itself with one or the other political premise, activism would be seen as precisely based on belief in the proactive agency of the art and artists within the socio-political scenario.

The presentation will sketch the revolutionary historical role artists have played starting with Communist movement and proletarian struggle in 20th century India which start with Indian People’s Theatre Association (IPTA). Any art worth naming as directly addressed and engaged with people’s struggle and reality began in Bengal in the early 1940s in the context of the great famine with the works of SomnathHore, Chittaprosad, ZainulAbedin and similar others in theatre, cinema and photography.

Chittaprosad in the late 40s and Hore in the mid 50s and artists such as J. Swaminathan and Ramkumar also withdrew from the Communist party in 1953 and ’54 respectively and practiced varied modernist linguistic modes. The Indigenist trend of 1960s and the pop-figurative-narrative revival of 70s in art too were only culturally motivated avant-garde, based on elitist mode of art historical reflexivity and scholarship. It is from a critical view of the above that the short lived collective of ‘Indian Radical Painters and Sculptors Association’ was formed. The presentation will elaborate the ideological premises of the Radical collective.
The presentation would engage with the contemporary dalit, gay, feminist and other politically motivated artists working with people, collectively or independently – with deprived children, adivasis, and others who are ravaged by communal violence. Considering this growing social and political awareness amongst practitioners of art over the past two decades in relating art to social and political causes, the presentation will try to critically address and theorize the contemporary artist’s engagement with political and social issues as a larger problematic within the growing interest in New Media/Meta Media Art.