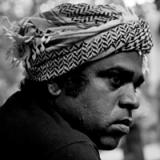 Bhagwati Prasad (b. 1976, Delhi) is an artist working in performance, graphics and research. He is the author of the graphic book, The Water Cookbook (2010). He started researching popular culture and media life and histories in Delhi, which resulted in him co-authoring Tinker.Solder.Tap (2009), a graphic novel on the history of media piracy in Delhi.

He has been part of various experimental art context and spaces, including Sarai Reader 09: The Exhibition (2012-13), of which he was also the technical director. He was interlocutor for the 2012 and 2013 editions of City as Studio, an annual artist residency-cum-studio programme of Sarai-CSDS, Delhi.