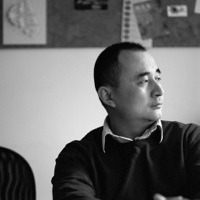 BU Bing, born in 1973 in Yangzhou, is the principal of One Design Inc. He received his bachelor’s and master’s degree of Architecture from Tsinghua University and Yale University respectively. He joined MADA s.p.a.m. in 2000, and established One Design Inc in 2003. His works include the LVG Office Complex at Shanghai, the Wulongtan Resort at Ningbo, urban design for West Town of Zhujiajiao, art installation work Cloud Room at Beijing/Taichung/Washington DC. His works have been exhibited in Chengdu Biennale 2011, “Flourishing & Flowing” A Contemporary Art Exhibition across the Strait 2011, Shanghai Biennale 2002, Shenzhen/Hong Kong Biennale 2007, and Utopia2 at CIVA Brussels 2008. Bu Bing also curate exhibitions including “[email protected]” at Shanghai 2002, “Ningbo, the metamorphosis of a Chinese city” at Berlin Aedes 2003, “Un-natural” at BCA Beijing 2009.