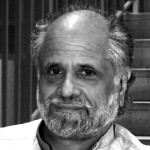 Homi K. Bhabha is the Anne F. Rothenberg Professor of the Humanities in the Department of English at Harvard University and the Director of the Humanities Center at Harvard. He also serves as the Senior Advisor on the Humanities to Harvard’s President and Provost. Bhabha is the author of numerous works exploring colonial and postcolonial theory, cultural change and power, and cosmopolitanism, among other themes. Some of his works include Nation and Narration and The Location of Culture, which was reprinted as a Routeledge Classic in 2004 and has been translated into Korean, Spanish, Italian, Arabic, Serbian, German and Portuguese. A selection of his work was recently published in a Japanese volume. Harvard University Press will publish his forthcoming book A Global Measure, and Columbia University Press will publish his next book The Right to Narrate.

Bhabha most recently contributed essays to exhibition catalogues on the work of Anish Kapoor, Raqib Shaw, and Shahzia Sikander and interviews with Akbar Padamsee and on the work of ORLAN. He has served as an advisor at key art institutions including the Institute of Contemporary Arts London, the Whitney Museum of American Art and the Rockefeller Foundation; he is a member of the Asian Art Council at the Guggenheim Museum New York and an advisor on the Contemporary and Modern Art Perspectives project at the Museum of Modern Art New York. Bhabha also serves on the Steering Committee and Master Jury of the Aga Khan Architectural Prize, is a Trustee of the UNESCO World Report on Cultural Diversity, and served as a juror at the 53rd International Art Exhibition at the Venice Biennale.
Bhabha has held an Honorary Professorship at Tsinghua University in Beijing and at the École des hautes études en sciences sociales in Paris. He has delivered the Presidential Lectures at both Stanford University and Freie Universität Berlin, and most recently the Hegel Lecture at the Freie Universität Berlin, Mellon Distinguished Lecture at Duke University and keynote lectures at the Asia-Pacific Centre of Education for International Understanding and the Korea Foundation in Seoul, the “Changing the Humanities/the Humanities Changing” conference on the occasion of the 800th anniversary of the University of Cambridge and the German Federal Ministry of Education and Research conference on the humanities. Bhabha serves as Vice-Chair of the World Economic Forum’s Global Agenda Council on Values, on the Advisory Boards of the Graduate School of North American Studies and the International Research Center “Interweaving Performance Cultures” at Freie Universität Berlin and in the Advisory Group of the Literary Studies Symposia at the German Research Foundation.
Educated at the University of Bombay and the University of Oxford, Bhabha was profiled by Newsweek as one of “100 Americans for the Next [21st] Century.”