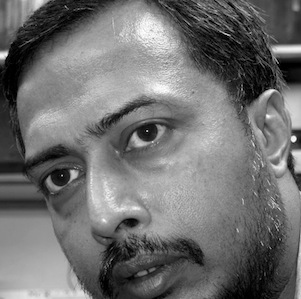 Moinak Biswas (b. 1961) studied English literature at Jadavpur University and did his PhD on Indian film history from Monash University, Australia. After teaching English in a government college for four years Moinak joined the newly launched Department of Film Studies at Jadavpur University, Kolkata, in 1993. The Department was the first of its kind in India, where he took a leading part in setting up programmes and facilities. He initiated the Media Lab, a centre for art and learning through digital forms, at Jadavpur in 2008. Moinak edits the Journal of the Moving Image, and co-edits BioScope, South Asian Screen Studies. He has written on Indian film and culture in Bengali and English for numerous anthologies and magazines. Among his recent publications is the volume Apu and After, Revisiting Ray’s Cinema (2006). He has recently written and co-directed the award winning feature film Sthaniya Sambaad (2009).