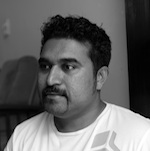 It would not be an exaggeration to call Gigi Scaria an ‘archaeologist’ of urban spaces, more particularly in his case that of the city of Delhi, where he has been living now for the better part of a decade. ‘Archaeology’ here refers to the range of methods and techniques deployed by the artist in order to bring to light what has lain hidden; it implies excavation and depth, an attentiveness to the sedimented layers and accretions of historical time, and approaches the city as a palimpsest of traces. One can also divine a vision of the artist’s vocation underwriting the method; it has a critical dimension that sees his work as a dissection, as an analysis of social structures that makes visible the conditions that necessitate them and that it hides. The archaeological metaphor that organizes and runs through his recent work is a logical extension of concerns that belong to its prehistory, which saw the artist involved in a cartography of social structurations (what he calls “social mapping”); – the newer work draws upon and retains in a transformed manner elements of his earlier engagements. The cartographic and the archaeological form the two axes of his current body of work, articulating the conceptual grid across which is distributed a series of relationships, – surface and depth, the new and the old, the spatial and the temporal, the historical and the political, and so on, – that are played off against each other in order to draw out a complex set of correspondences that delineate the histories of the present and its often fraught relationship with Modernity.