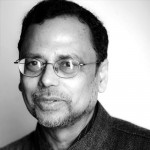 Dipesh Chakrabarty holds a B.Sc (Hons.) degree from Presidency College, University of Calcutta, a Post-graduate Diploma in Management (considered equivalent to MBA) from the Indian Institute of Management, Calcutta, and a Ph.D (History) from the Australian National University.

He is currently the Lawrence A. Kimpton Distinguished Service Professor in History, South Asian Languages and Civilizations, and the College at the University of Chicago. He is also a Faculty Fellow of the Chicago Center for Contemporary Theory, an Associate Faculty of the Department of English, holds a visiting position at the Research School of Humanities at the Australian National University, and is an Honorary Professorial Fellowship with the School of Historical Studies at the University of Melbourne, Australia .

Chakrabarty was elected Fellow of the American Academy of Arts & Sciences in 2004 and Honorary Fellow of the Australian Academy of the Humanities in 2006. He was awarded an “Eminent Scholar Award” at the International Studies Association Convention in 2007. The University of London has invited him to receive the degree of D. Litt (Honoris causa) in September 2010 .

Chakrabarty is a founding member of the editorial collective of Subaltern Studies, a co-editor of Critical Inquiry, and a founding editor of Postcolonial Studies. He is a Contributing Editor to Public Culture, a member of the Board for History Compass and has served on the editorial boards of the American Historical Review. He is one of the editors (along with Sheldon Pollock from Columbia University and Sanjay Subrahmanyam from UCLA) of the new series South Asia Across the Disciplines published by a consortium of three university presses (Chicago, Columbia, and California). He also serves on the Board of Experts for the Humboldt Forum in Berlin.

Chakrabarty is currently engaged in completing two books to be published by the University of Chicago Press. They are provisionally entitled The Untimely Historian: Europe and the Birth of Historical Research in India and The Climate of History: Four Theses. A collection of his essays in German in being brought out by Campus Verlag in Berlin and a collection in Bengali by Ananda Publishers. His other publications include: Rethinking Working-Class History: Bengal 1890-1940 (Princeton: 1989, 2000); Provincializing Europe: Postcolonial Thought and Historical Difference (Princeton, 2000; second edn. 2007); Habitations of Modernity: Essays in the Wake of Subaltern Studies (Chicago, 2000); He has also edited (with Shahid Amin) Subaltern Studies IX (Delhi: OUP, 1996), (with Carol Breckenridge, Homi Bhabha, and Sheldon Pollock) Cosmopolitanism (Duke, 2000); (with Rochona Majumdar and Andrew Sartori) From the Colonial to the Postcolonial: India and Pakistan in Transition (Delhi: OUP, 2007); (with Bain Attwood and Claudio Lomnitz) “The Public Life of History,” a special issue of Public Culture (2008). Provincializing Europe has been translated into Italian, Spanish and French, and is being brought out in Turkish, Polish, and Korean. Habitations is being translated into Arabic. A collection of two essays translated into Spanish was published in 2009: El humanismo en la era de la globalizacion and La descolonizacion y las politicas culturales (Buenos Aires: Katz Editores, and Barcelona: Centro de Cultura Contemporanea de Barcelona, 2009).