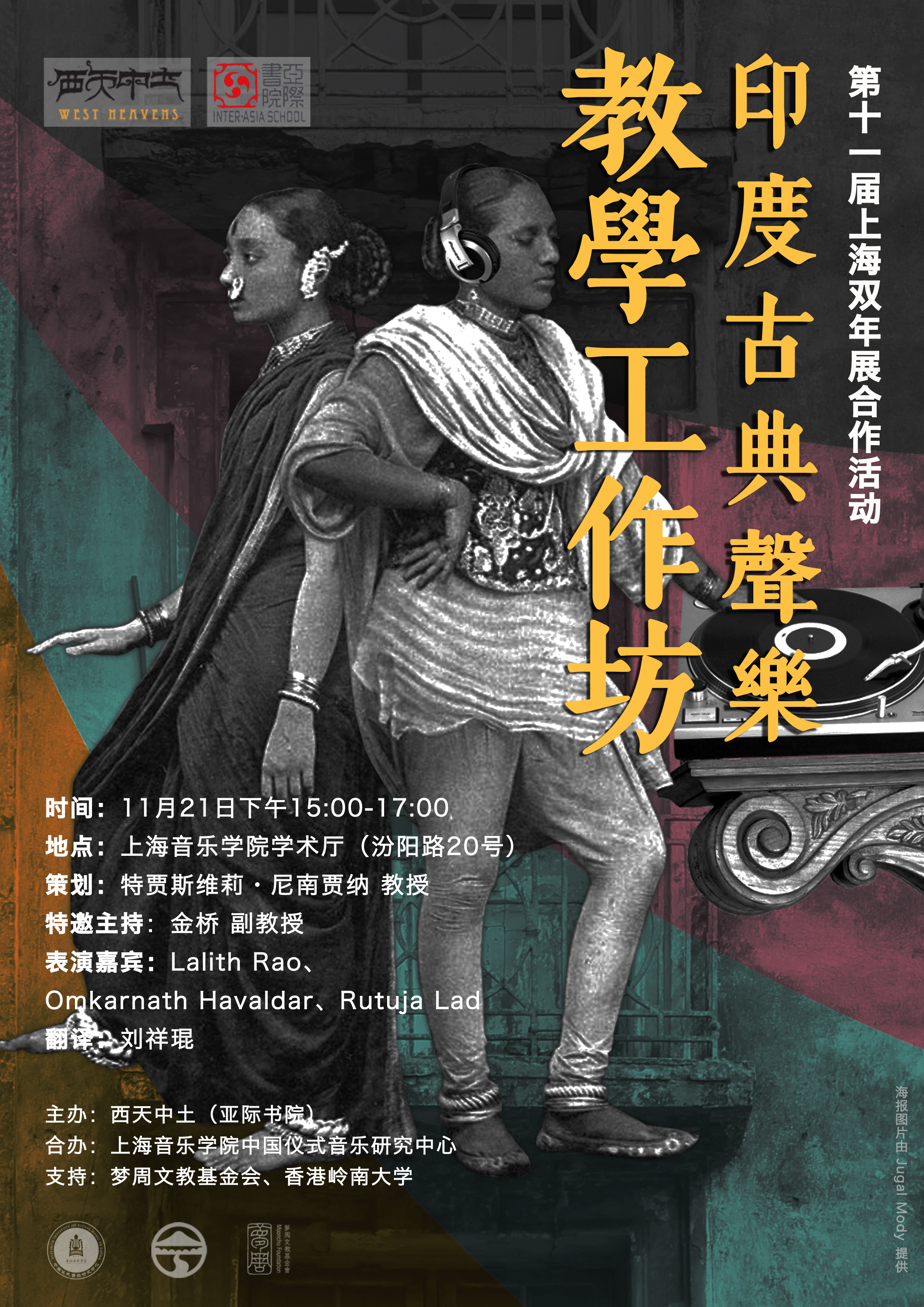 The singers will take up a pentatonic raga (melody) like Bhupali or Durga. Each musician will demonstrate one aspect (alaap, bol, taans) through a particular composition. Then they will demonstrate how they present a composition with all its elaborations. Participants will be taught to sing an actual composition. If there is time, we can have more discussion of different features of Indian music, and more specifically about what are the teaching practices in Indian music.

Guest Performers
Lalith Rao is the doyenne of the illustrious Agra-Atrauli Gharana. Leaving behind a lucrative engineering career, she took to Hindustani classical music as a full-time pursuit and became one of its ace performers. She was groomed by Ustad Khadim Husain Khan, the acknowledged doyen of the Agra-Atrauli Gharana and one of the finest teachers of the last century. She has been a regular concert artiste for over three decades and has performed in important musical events all over India and undertaken several concert tours of the US, Canada, UK and Continental Europe. She is a top grade artiste of the All India Radio and has regularly performed on radio and television for many years. She rendered several hundred traditional Ragas and compositions of the Agra-Atrauli Gharana in a unique Archival Project for the Ethno-Musicology Department of the University of Washington in Seattle, USA. She was the first Chief Co-ordinator for a Ford Foundation Archival Project of the Sangeet Research Academy of Calcutta for two years. She has to her credit over a dozen very popular commercial albums brought out in India by HMV, Magnasound, Sony Music, etc. and two abroad by Navras Records of London and Ocora Radio France of Paris. Recently she choreographed, along with her disciples, ‘Agra Gharana – Ek Vatavriksh’ which traced the history and evolution of the Agra Gharana, and which was hailed by the cognoscenti as one of the best presentations ever on a Gharana. Although she has stopped giving public concerts because of a voice problem, she regularly gives erudite Lecture-Demonstrations on various aspects of Hindustani classical music. She has been honoured with lifetime achievement awards from prestigious music organizations.

Omkarnath Havaldarwas born into a family of musicians, and was initiated into Hindustani classical music by his father Dr. Nagarajrao Havaldar, a well-known Hindustani classical vocalist. He was trained under masters like Pandit Madhava Gudi of Kirana Gharana and Pandit Panchakshari Swami Mattigatti of Jaipur-Atrauli Gharana, and is fortunate to inherit the finest nuances of both the Gharanas. He is now pursuing his training in Dhrupad and Khayal from Pandit Indudhar Nirody. He is a graduate in Psychology from Bangalore University and completed his master’s degree in music from KSGH University of Music and Performing Arts, Mysore. He is a recipient of the Kishora Pratibha Puraskar instituted by the Kannada & Culture department, Government of Karnataka (2000), and has performed at Yale University and the Chicago Center of Music. He also taught underprivileged children at the Afghanistan National Institute of Music in 2009. He is also on the elite panel of Artists at the Department of Kannada & Culture Govt. of Karnataka since 2000 and an approved graded artist for All India Radio and national television. QPTV New York has recorded his music and he does regular telecasts in the US.

Rutuja Ladwas initiated into music by her parents Tanuja Lad and Umesh Lad right from the age of 5 years. Later She started learning from Gaanyogini Dhondutai Kulkarni, a torch bearer of Jaipur Atrauli Gharana and was under her tutelage until she passed away in 2014. She also learns harmonium from Shri Sudhir Nayak, and is now studying under the able guidance of Dr. Ashwini Bhide Deshpande. She has won several prizes in the intercollegiate state level classical and semi classical music competitions, and has also participated in the music reality show Marathi Idea SRGMP (Season 7) and reached till the top 6 level. She has performed at prestigious events organized by the Dadar Matunga Cultural Centre, Bhavans Cultural Centre, Hridayesh Arts, INT Aditya Birla Centre of Performing Arts, Suburban Music Circle, Gaanyogini Mahotsav, etc. She has completed her M.A in music and stood first in S.N.D.T University music department. She is presently a visiting faculty member of the Post- Graduate Music department of S.N.D.T University.

Curator
Tejaswini Niranjana is Professor and Head of the Department of Cultural Studies at Lingnan University, Hong Kong. She has an MA in English and Aesthetics (1981) from the University of Bombay, an MPhil in Linguistics (1982) from the University of Pune, and a PhD (1988) from the University of California at Los Angeles. She taught for ten years in the English Department of the University of Hyderabad before moving to Bangalore to help set up the Centre for the Study of Culture and Society (CSCS) in 1998 which until 2014 offered an innovative PhD in Cultural Studies, the first of its kind in India. For her research work, Tejaswini has been awarded the Homi Bhabha Fellowship, the Sephis Fellowship, the Prince Claus Fund award (twice), the Rockefeller Fellowship, and the Sawyer Fellowship. She has been a Visiting Fellow at the Wissenschaftskolleg zu Berlin (2007), the Institute for Advanced Studies in Nantes, France (2011), and the Asia Research Institute-Singapore (2016). Her publications include Mobilizing India: Women, Music and Migration between India and Trinidad (Durham, 2006) and Siting Translation: History, Post-structuralism and the Colonial Context (Berkeley, 1992). She has co-edited Interrogating Modernity: Culture and Colonialism in India (Kolkata, 1993) and Genealogies of the Asian Present: Situating Inter-Asia Cultural Studies (Delhi, 2015). She has co-produced, with Surabhi Sharma, the films Jahaji Music: India in the Caribbean, and a new documentary on Hindustani music in Mumbai. In 2015, she curated an exhibition in Mumbai titled Making Music-Making Space. At the 11th Shanghai Biennale, she and Surabhi Sharma are showing a video installation titled ‘Riyaaz’ (Practice).

Dr. Jin Qiao，Associate Professor in the Department of Musicology, Shanghai Conservatory of Music, and senior visiting scholar in the School of Music, Taiwan Normal University. He graduated from the Department of Composition and Conducting, Shanghai Conservatory of Music, and then achieved Doctor Degree of Musicology there with a dissertation of Xiao Youmei and Music Education in Modern China. He previously taught in Shanghai Jiaotong University, and then in Shanghai conservatory of Music. His research scope include music in modern China, ethnomusicology, and film music. He was honoured Excellent Art Teacher from Ministry of Education of the People's Republic of China, and is the main teacher of Excellent Courses of Shanghai municipal level and national level. His publications include Music Appreciation, Pure Stream, Appreciation of Famous Symphonic Music, Xiao Youmei and Music Education in Modern China, Music and Sound Effects in Animation, and several papers on related journals.