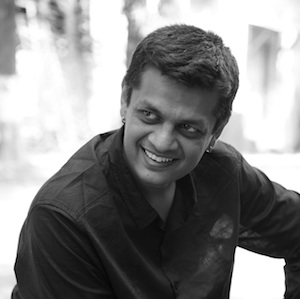 Rohan Shivkumar is an architect and an urban designer practicing in Mumbai. He is also currently Deputy Director at the Kamla Raheja Vidyanidhi Institute for Architecture and Environmental Studies.

His interests are in looking at architecture as a cultural practice -not only that as building making. As a result he is interested in cross-disciplinary ways of looking at architecture and the idea of context. These include fields like art, literature and cinema and the ways in which they engage with the city. Recently his interest has been shaped by the dramatic changes in the physical landscape of the city- with rampant development wreaking havoc on communities and collective memory. He is interested in deciphering the patterns of
these changes- the ideologies and their manifestations, especially of the resistances posed by everyday life to the displacing tendencies of globalization.

After his Bachelors in Mumbai, he did his Masters at the University of Maryland on Regional And International Studies in 1998. Since coming back to Mumbai that year he joined as a visiting faculty member at the KRVIA and parallely began work with the Urban Design Research Institute' (UDRI) on their projects in the city.

He was Project Co-ordinator for the 'Churchgate Revival Project' and a project for the development of a 'Tourist District' around the Gateway Of India. He also worked on a publication on the city of Navi Mumbai. Besides these, he has worked on a few exhibitions and articles regarding the city. Recently he worked with the UDRI on an MMRDA project on a reappraisal of the heritage list of Mumbai city. He has also worked with non governmental organisations like Citispace as a consultant on surveys and analysis of hawking and non-hawking zones and slum rehabilitation projects on public spaces.

In the school Rohan headed the Research and Design Cell - the research wing of the school which works on various projects in the city regarding disused industrial lands, housing, environmental issues, etc. Rohan has been involved with many of these projects and is
currently the Project co-ordinator for a project titled 'Cinema City'- an interdisciplinary project exploring the relationship between cinema and the city of Mumbai.

He also has an architectural practice in Mumbai and we have worked on a few residential and infrastructure projects, the largest of which is a fire station built for the HPCL refinery. Today he practices in Mumbai in collaboration with Rupali Gupte. Their work includes
consultancy projects for slum communities towards public infrastructure and sanitation. He is also working through CRIT as a consultant to a housing project for slum communities in Mumbai.

Rohan teaches Architectural Design Studios at different levels, along with thesis. He also takes a Theory of Design course in the Second Year and Urban Design Studio. Many of these projects are concerned with the city of Mumbai and the transformations it is undergoing.