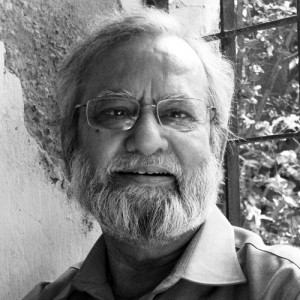 Gulammohammed Sheikh (b. 1937) is an artist, writer and educationist. For over five decades he has pioneered an engagement with historical forbears and a social and political investment in art practice. As a teacher of art history and painting at the M.S. University of Baroda, and through numerous residencies and publications, he has contributed to a renewed understanding of cross-cultural themes in artistic pedagogy, in an Indian and international context.

His major works include a mural in the Legislative Assembly in Bhopal, paintings dealing with poetry of the sixteenth century poet Kabir, a number of painted and digital books in accordion format and painted ‘Shrines’ made of wooden boxes with multiple doors. The mural refers to India’s past and present through stories of good governance to environmental disasters like Union Carbide. Books and shrines open in multiple directions for the viewer to enter and intervene in the narrative portrayed. Using linguistic parameters of traditional Indian and Sienese painting in a contemporary context, he has sought to evolve a personal vocabulary for our times.

Sheikh has been Visiting Faculty at the Art Institute of Chicago (1987 and 2002) and Visiting Fellow at Delhi University (2004). He has held residencies at Montalvo, California (2005), the University of Pennsylvania (2000) and the Civitella Ranieri Center, Umbertide, Italy (1998). Athawa, a collection of his poems, was published in 1974. He has written widely on art and aesthetics. At the National Gallery of Modern Art, New Delhi, he co-curated Birth and Life of Modernity (1989), consisting of selections from French museums and in 2006-07, a centenary retrospective of the artist Benodebehari Mukherjee. In 2002, he curated New Art from India: Home, Street, Shrine, Bazaar, Museum, for the City Art Gallery, Manchester, U.K.