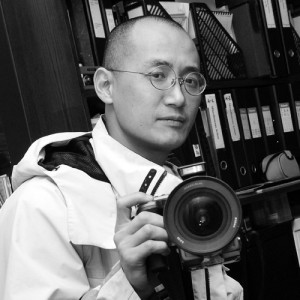 Qiu Zhijie was born in 1969 in Zhangzhou, Fujian. He enrolled in the printmaking department of the then Zhejiang Academy of Fine Arts in 1988; his graduation piece ‘Big Glass’ and the work he began in 1990 in his own time outside class, ‘Copying Lanting Xu One Thousand Times’(the copied piece is one of the most famous of China’s calligraphic works, by Jin Dynasty literatus Wang Xizhi) were both considered part of ‘China’s New Art Post-1989’ movement (as marked by the major exhibition of the same name at the Hanart Gallery, Hong Kong, in 1993).

In 1993 Qiu began to develop an interest in the philosophy of language and cultural anthropology. While still resident in Fujian he completed a series of oil painting works he called ‘Investigative Reports’, his field investigations being conducted in such places as Tibet, Xinjiang and Shanxi. During a stay at Santai Mountain in Hangzhou in late 1993 he began to employ photography, video and installation in his art. Qiu advocated using the latest findings of experimental studies of language to carry out social critiques and self-criticism. He began to give serious consideration to such questions as the perspective from which observation is made, controlling the power of the media and the falseness of concepts of identity. In 1996 he curated an exhibition of video art and for a long time was one of the main motive forces promoting art in new media in China. During this same period while he was in Hangzhou, the photographic series ‘Tattoo’, ‘Rainbow’ and ‘Fine’ he made came to be regarded as exemplary of the conceptual photography movement then current in China.

In the late 1990s Qiu turned to a critique of the tendency to blindly worship the intellectual in conceptual art, beginning in 1999 curating a series of exhibitions under the rubric ‘Post-sense Sensibility’ that promoted looking at works in situ and holistically and opposed excessive explication of art. It was also at this point that Qiu began to move towards more experimental exhibition curation. His own creative work went in two diametrically opposite directions, on the one hand turning to expositions of Chinese-style philosophies of life and historical sensibilities and reviving his interest in calligraphy, and on the other developing an interest in the methodology of sociological field surveys. In 2002 Qiu took part in the design of a major project called ‘The Long March – A Walking Visual Display’ and created his own pieces such as ‘Long March – Left, Right’.

In September 2003 he was appointed a professor at the mixed media department of the China Academy of Art (formerly his alma mater, the Zhejiang Academy of Fine Arts) and began an integration of his prior artistic work, theory and practice using a concept of ‘total art’, the results of which he employed in his teaching. ‘Total art’ advocates using cultural research as the basis for artistic work and then in turn using the latter as a basis for bettering mankind and the world.

Qiu Zhijie’s recent solo exhibitions include ‘Brainstorming: Qiu Zhijie and the Total Art Studio’ shown at the Guangdong Museum of Art in Guangzhou in 2010 and ‘A Suicidology of The Nanjing Yangtze River Bridge 4 – Twilight of the Idols’ at the Haus der Kulturen der Welt in Berlin, 2009. Recent group exhibitions Qiu has shown works at include the Fourth Fukuoka Asian Art Triennale in 2009 and the China Pavilion at the 53rd Venice Biennale.