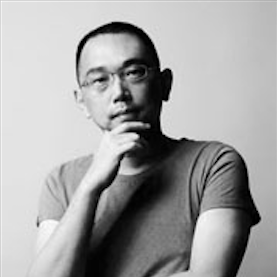 Yao Jui-chung was born in 1969 in Taipei. He graduated from The National Institute of The Arts (Taipei National University of the Arts) with a degree in Art Theory. In 1997, he represented Taiwan in “Facing Faces-Taiwan” at the Venice Biennale and took part in the International Triennale of Contemporary Art Yokohama in 2005, APT6 (2009) and Taipei biennial (2010). He also participated in numerous other large international exhibitions. Apart from working in the fields of theatre and film, he has taught art history, wrote art criticisms and curated exhibitions. In 1997, he attended the Headland Center for the Arts (San Francisco). He was artist in-residence at Gasworks Studio (London) in 2001, ISCP (NY) in 2006 and Glenfiddich (Scotland) in 2007.

Yao, Jui-chung specializes in photography, installation and painting. The themes of his works are varied, but most importantly they examine the absurdity of the human condition. Representative works include his Action Series which explores the question of Taiwan’s identity in Military take over (1994), subverts modern Chinese political myths in Recovering Mainland China (1997), and examines post-colonialism in The World is for All (1997~2000), as well as Long March-Shifting the Universe (2002). In recent years, he has created photo installations, combining the style of “gold and green landscape” with the superstitions that permeate Taiwanese folklore, expressing a false and alienated “cold reality” that is specific to Taiwan. Representative works include the series Celestial Barbarians (2000), Savage Paradise (2000) and Heaven (2001). Another photo installation series Libido of Death (2002) and Hill (2003) tries to probe into the eternal issue of body and soul. Recently, Yao, Jui-chung has assembled all the black-and-white photos of ruins he took in the past fifteen years, grouped under the themes of Industry, Religious Idols, Architecture and Military Bases. They reveal the enormous ideological black hole in Taiwan hidden behind the trends of globalization and Taiwan’s specific historical background, as a continuation of the main theme of his work: the absurdity of the historical destiny of humanity. In 2007 Yao started to create a series of works, including Wonderful (2007), Dust in the Wind (2008~2010), Dreamy (2008~2010), Romance (2009) and Honeymoon (2010~2011). He appropriates masterpieces from Chinese art history and recreates them in his own work, transforming them into his personal history or real stories, in an attempt to transform grand narratives into the trivial affairs of his individual life. Yao intends to usurp so called orthodoxy with his recreated landscapes.