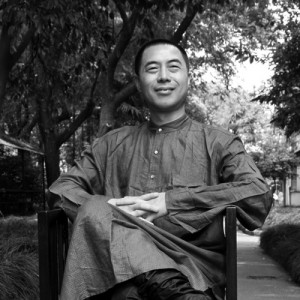 Liu Dahong was born in Qingdao, Shandong in 1962. He graduated from the then Zhejiang Academy of Fine Art (now the China Academy of Art) in 1985, since which time he has taught in the art department of Shanghai Normal University.

Liu uses his individual memories and imagination to bear witness to, record and compile the history of the entire era. When his works come to be presented in a relatively complete form we will find ourselves astounded by the scale, profundity and systematic nature of his accomplishment. For many years now Liu has put all his mental energy into a deconstruction and analysis of ideology through his paintings.

In the early days of his style taking shape Liu Dahong revealed a mode of emotional expression that drew on his native folkloric vernacular, providing a meticulous and complex representation of the local life of his Qingdao hometown and his own childhood memories; his painting technique showing the influence of the Dutch masters. Beginning with his 1987 works ‘Crossroads’ and ‘The Bund’, Shanghai gradually came to be the main source of material for the personal history Liu was composing; by the time he painted ‘Waking of the Insects’ in 1988 he had already properly established his own individual look to his paintings, a look that expressed his awareness of theme, methodology of language and ability to control the structure of his paintings. The complexity of his work had achieved astonishing levels; behind the scenes the artist was working with an incisive and clear-sighted intellect, intent on providing us with sectional diagrams of our collective consciousness. The grand ambition of Liu’s particular type of ‘historiographical composition’ is taken to its apogee in his 1998 work ‘A Tale of Two Cities’; the scene of seething madness depicted seems to show that the meaning of revolution is nothing else but to provide a stage on which repressed people under any given political order and in any given historical era can cyclically let their youth shine forth and give vent to their passions. The mood of ‘Sacrificial Altar’, completed in 2000, tends still more towards restraint and severity. Formally this piece reproduces the Van Eyck brothers’ ‘Adoration of the Mystic Lamb’ (part of their famous Ghent Altarpiece); in content it offers a holistic composition on that major episode in history, the Great Proletarian Cultural Revolution. The Christian spiritual hierarchy is appropriated as counterpoint to highlight the theocratic politics that are a particular feature of contemporary Chinese history. Liu’s 2007 ‘Rifle Bridge’ is an ingenious composition, painting a river bridge in the form of a rifle, a verbal reference to the historical line that ‘political power comes from the barrel of a gun’ and at the same time pointing out the role that such great construction projects as these bridges have played in the years since the establishment of ‘Red China’ – as political weapons flaunting and guarding power.

Liu Dahong’s most recent exhibition was ‘My University (1990-2010)’, held at the Iberia Center for Contemporary Art in Beijing in 2010. Group exhibitions Liu has taken part in include ‘Farewell to Post-colonialism’ at the Third Guangzhou Triennial in 2008.